The Roman Wall runs through the pretty village of Burgh by Sands, but we also take you out into the marshes, north of the village, to the spot where one of England’s greatest kings, Edward 1 (1239-1307), died. Following his ruthless treatment of disloyal Scottish subjects, Edward was dubbed the ‘Hammer of the Scots’. However, the ‘Edward 1 Monument’ commemorates his ignominious death from dysentery, in a military encampment out on the bleak marshes of the Solway Firth — ironically, on his way to ‘hammer’ Scotland yet again.

Burgh by Sands lies within the Solway coast area, just west of Carlisle.  Hadrians Wall, stretching 73 miles, passes through the village, which was once the site of the Roman Fort Aballava or Aballaba. Location: Burgh by Sands, Allerdale, Cumbria, North West England, England, CA5 6AN, United Kingdom Nearby: Carlisle 6 miles. Opening times: not applicable. Parking: free throughout village. … 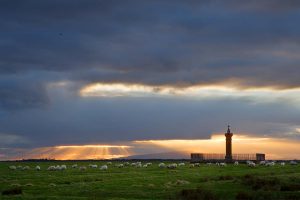