Corbridge Roman Town (or ‘Corchester’ or ‘Coria’ or ‘Corstopitum’ or…) is not situated on Hadrian’s Wall, but over two miles south, down in the Tyne Valley at the point where the important north–south Roman road, Dere Street, bridged the river and met the east-west Stanegate. It includes some good examples of Roman ‘central heating’, or hypocausts — which smaller children (and childish adults) love to explore.

Being less than ten minutes from Hexham, the Roman Town at Corbridge is one of the easiest sites to visit. The up-market village of Corbridge is also worth a stop, with its range of ‘boutique’ shops, pubs and cafes. At Go Hadrian’s Wall we have a range of vehicles, and provide flexible travel for any number of people, taxis up to and including groups of 20 or more via minibuses or minicoaches.

Corbridge, once a busy Roman Town, is now a destination of distinction and is home to some of the oldest finds in Britain.  Once a garrison town for Roman soldiers and a safe crossing place over the Tyne, houses here are built with stone from the Roman town of Corstopitum, where today’s Corbridge grew from. View the remains of this … 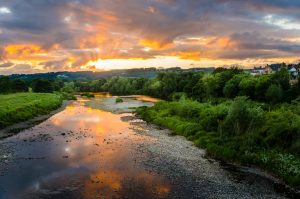