Many would agree that the western ‘end’ (or ‘start’) of Hadrian’s Wall, on the banks of the Solway Firth, has an idiosyncratic charm all its own — certainly different from Segedunum, over 80 miles away at the eastern end. The walk, or cycle into Carlisle also has its own curiosities, including gregarious Roger, the ‘sign-post man’, near the shore at Port Carlisle, who will include the distance to your home on his sign, if you want a souvenir picture of the walk to ‘post’ on social media.

There used to be a railway viaduct across the Firth to Scotland, near Bowness-on-Solway, but sadly it closed early in the 20th century. Today, you can catch a bus from Carlisle to Bowness, or let us take you there. At Go Hadrian’s Wall we have a range of vehicles, and provide flexible travel for any number of people, up to and including groups of 20 or more.

At the western end of Hadrian’s Wall Bowness on Solway was the location of the Roman fort Maia and guarded the approach from the Solway. The village is built on the site of the fort and Roman stones can be seen in the local buildings, including the Norman church of St. Michael.   Location: North West Cumbrian Coast, Bowness-on-Solway, Wigton … 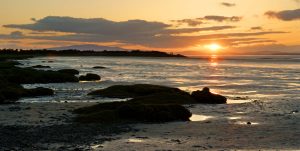